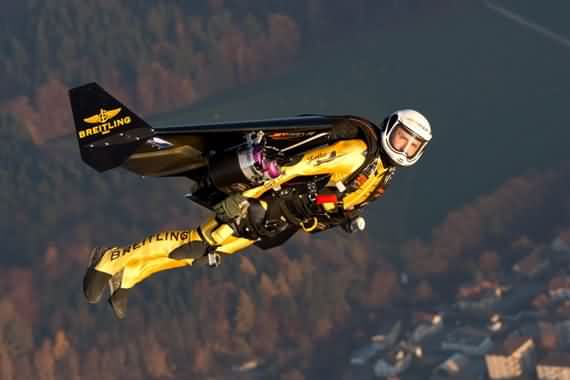 First of all and before speaking about jetpacks; we have to indicate that history is full of legends and fables of men tried to fly. Icarus is the most famous person who flew too close to the sun which melted the wax holding his feathers and as a result, he fell into the sea and drowned.

A Chinese person was the first who flew kites around the 5th century BCE and in 875 CE in the city of Qutuba Al-Andalus (Cordoba, Spain), Abbas ibn Firnas accomplished the first successful attempt of human flight.

Abbas Ibn Firnas’s homeland was Izn-Rand Onda Al-Andalus (today Ronda Spain) but he lived in the Emirate of Cordoba.

Ibn Firnas the 70 years old man, constructed his flying machine after spending the intervening years in studying the nature of flight; along with his other studies. He constructed a pair of wings using silk and wood and had sewn with actual feathers.

Abbas Ibn Firnas wasn’t only famous for his attempt at human flight; but also he has many other accomplishments to his name.

He was an astronomer who built a mechanized planetarium with revolving planets; and also he studied mechanical devices and timepieces. Furthermore he was interested in crystals, quartz and sand which would lead him to melt sand into glass allowing him to create Andalusian drinking glasses.

Among other very amazing and great experiments which made by Mr. Fernas is his trying to fly; he covered himself with feathers then, attached two wings to his body, and getting on an eminence, flung himself down into the air. According to the testimony of some famous writers; he flew a nice big distance, as if he had been a regular bird, not a human being with feathers. But, he felt down very quickly after that and he hurt his back badly ; because he forgot to provide himself with tail like a bird.

Sky news announced that there are 2 men with jet pack flying in the sky next to Emirates A 380 one of the largest passenger airplanes around the world.

Yves Rossy ranked into Guinness record books as the first one to sky surf from a hot air balloon and in 2004 Yves Rossy also became the first person to fly horizontally for 4 minutes with a jet-propelled wing. He’s the first one to transform from human to a jet man.In the near future you can see, watch, and learn a lot of new things you never ever hear about it before. But it will be reality while it was a dream in the past or even it was a regular idea. It’s time to enjoy these new inventions in our life.

Jetpacks became a new method of flying, specially flying horizontally.May be soon Mr. Rossy can train new fly lovers on his new way of flying. That means, training well is a must before you start flying on your own. You can enjoy an incredible video shows two men with jetpacks flying in the air next to airplane.

So YES, I can do it, I can touch the sky…. Two Men With Jetpacks.

No comments to show.